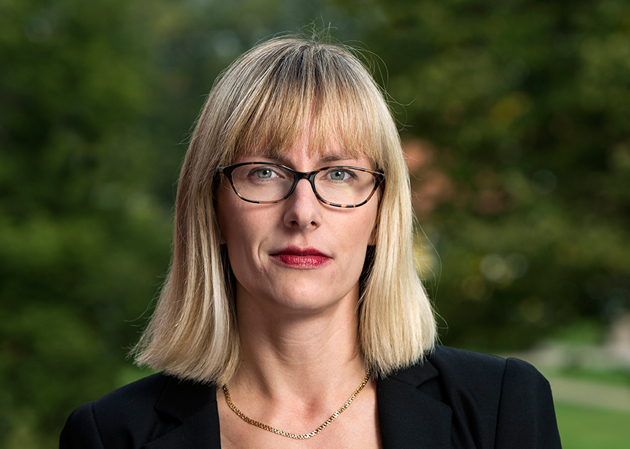 It has been a winding road for Maria Tenje to become Associate Professor in Microsystems Technology and lead a research group at the Department of Engineering Sciences. Photo: Markus Marcetic, SUA

The art of building impossible systems

During her summer job, Maria Tenje used to calculate how to place the ladder to access the maximum amount of fruits along the rows of apple trees. Today she uses her analytical skills to develop smarter micro-systems for biomedical application.

A desire to improve current conditions is often mentioned as the reason for becoming a scientist. But a job in academia was never on Maria Tenje’s wish list. After receiving a Bachelor's Degree in Physics in London, she had had enough of the academic world.

‘I didn’t want to specialise which was why I had chosen such a broad education as physics. I also associated an academic career with a too heavy workload without an adequate salary.’

She decided to make a complete switch. After three years in London as a poor student, without being able to afford trips to musicals or restaurants, life would now be different. Maria Tenje had her sights set on a consultant job in London but everything changed when she met her future husband during a visit to Sweden. She decided to move to Malmö.

‘During a summer job my friend pointed out to me, ‘you're nuts, all you do is counting all the time!’ When we were picking apples I used to analyse everything and try to optimize each activity. I figured out how we could pick a maximum amount of apples per second if we worked in a certain way and how often I would move the ladder to save steps  - I guess I  had a perfect strategy for picking apples,’ laughs Maria Tenje.

She had been inspired to continue studying, and went on to Lund University for a master's degree. The degree project took her to Technical University of Denmark, DTU, just north of Copenhagen. The project involved developing mechanical bio-sensors for tests such as allergy analyses of blood. The focus for Maria Tenje was to produce as thin a sensor as possible in a previously untested plastic material. Since the plastic was softer and more flexible, the structure needed to be particularly stable.

‘Silicon wafers were placed in a machine spinning layers of plastic structures. It’s a kind of craft where you need to know how fast and how long to spin in order to design structures that are only about five micrometers thick. Manual dexterity counts for a lot. It was actually the first time I got to do such practical work, and to be able to build and create something by myself was great.’

After doctoral studies and a post-doc position at DTU, followed by a research appointment at Lund University, Maria Tenje came to Uppsala University in September 2014 after applying for a tenure-track position. The activities she established in Lund within microsystems and life science applications have now been transferred to her new research group EMBLA at the Department of Engineering Sciences.

‘At the Division of Microsystems Technology where I work, my life science orientation is something new. Sharing a base with colleagues but having my own research focus is absolutely perfect.’

EMBLA, short for Exploring Microtechnology for Biomedical and Life Science Applications, aims to develop and improve research tools primarily within biology and medicine with the help of miniaturized systems. One of the group's research activities is single-cell-analysis. The researchers produce micro channels of glass and silicon, filling them with oil. When water is added to the canal systems, individual droplets of water are formed and enclosed by the oil. The aim is to encapsulate a single cell within every drop. Then the researchers can study how individual cells react to different substances added.

‘For cancer diagnosis, it is very important to know if you’re dealing with an aggressive or milder form of cancer cell, and that it doesn’t disappear in the test portion. Today it’s possible to do this analysis with droplets,’ says Maria Tenje.

The technology already exists at KTH, and today she is cooperating with that group. But what Maria Tenje has brought from a previous project in Lund is the method of integrating ultrasound into the microsystem. Since acoustic resonance can be used to remove small particles, the researchers are able to separate cell particles step by step for further analysis.

‘With acoustics we can create resonance in the channel, causing the particles inside a droplet to position themselves in the middle. After that, we build a structure that divides this droplet and gathers all particles in a new droplet. Step by step, we can identify which cells need to be further explored.’

Another focus for Maria Tenjes group is the research tool organs-on-a-chip: artificial models of human organs where the researchers grow organs in the form of cells on microchips. The different membranes on which cells are grown are made with the same techniques used to produce microchips for computers.

‘Organs-on-a-chip is about models at microscale designed to resemble various biological barriers such as the skin, the intestinal wall or the blood-brain barrier. These membranes do not prevent the transport of pharmaceuticals. In addition, we’re able to continuously bring in nutrients through channels, providing the cells with an environment for growth that better mimic the body than today's model systems.’

According to Maria Tenje, there are major ethical arguments to create better model systems as they reduce the need for animal testing. In the EU, around 10 million animals are used each year for medical and pharmaceutical research.

‘Many could be replaced by organs-on-a-chip to do the first studies of the ability of new drugs to penetrate physical barriers.’

The common thread in all her research project is to make a difference and ‘improve our lives, even if it’s in twenty to fifty years.’

‘I see technology as an enabler. I’m fascinated by the challenge to build and to do something, engineering being at the very core of technical development. The technical aspects have the greatest charm to me. But what is crucial is that they can be applied within the life sciences.’

Does: Recently promoted senior lecturer at the Department of Engineering Sciences in Uppsala. Still has two doctoral students at Lund University.

Qualifications: Has received the L'Oréal-UNESCO Award ‘For Women in Science’ in Denmark. Member of the Young Academy of Sweden 2014-2019. Wallenberg Academy Fellow at Uppsala University 2016.

Most proud of: ‘That I don’t give up. It gives a great sense of security, as I know I’ll be able to handle things when push comes to shove. I am also proud to have moved to different places and been able to initiate different activities in Lund and Uppsala.’

Hidden talent: ‘Knitting and embroidery. I really want to make the case for knitting which is a fantastic cultural heritage. It’s fascinating that by using only a thread and two sticks you can create garments with sophisticated patterns, which also keep us warm; what an incredible combination of function and design! It’s also one of many examples in the history of something created by women and which has no status at all despite the fact that it has improved our quality of life considerably. What would we have done without wool cardigans before there was a large textile industry? I mostly do smaller things, preferably with beautiful designs. And I've knitted ‘the Uppsala mittens ', that was a first step to connect to my new hometown.’

One of four Wallenberg Academy Fellows at Uppsala university 2016

Member of Young Academy of Sweden