Two important manufacturing techniques for our solar cells are co-evaporation and sputtering. These are also successful techniques for industrial manufacturing of CIGS-solar cells with high efficiency and they have therefore the advantage that they can also be used in a large-scale production. With co-evaporation, the elements that should be deposited are put into sources in a chamber. When the substrate has been transferred to the chamber the air is pumped out to a close vacuum and the sources are heated. The substrates are then moved in front of the sources in the chamber so the elements condense at its surface and build up a film. With sputtering the substrate is also in a vacuum chamber, but instead of evaporation targets that contain the elements are bombarded with non-reactive ions in a low pressure gas. This leads to that atoms are ejected from the surface to the chamber. Also for sputtering, the substrate is moved in front of the target to be deposited with a film. The pictures below show co-evaporation to the left and sputtering to the right.

Yet another film deposition technique is atomic layer deposition (ALD). This is a subclass to chemical vapor deposition and works by sequential reactions between the substrate and the original compounds that are called precursors. The precursors are sequentially, with so called pulses, brought into a chamber with the substrate and react with the surface of the substrate. This way, a thin film is grown. For CZTS-solar cells there is also a custom-built oven (see below) for annealing, a heat treatment, which is also needed to manufacture the films. Here, the atmosphere is controlled with an inert gas and evaporation from powders with sulfur or selenium, and the samples are moved between a hot and a cold zone. This will give the CZTS-layer the right type of crystal structure. 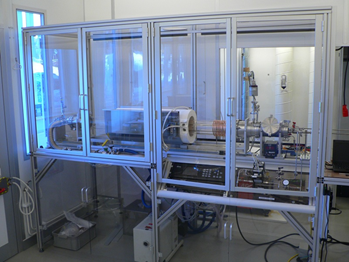 We also have equipment for measuring and improving our solar cells, and Ångström laboratory is one of Sweden’s most well-equipped laboratories for material characterization. This is a big advantage since our materials demands both high resolution microscopes and surface sensitive analyzing methods to be studied. In the measurement laboratory we have electrical measuring instruments and strong lamps that are calibrated to correspond to full sunlight. The measurements we do there are both used directly as feedback to the practical experiments in the clean room, but also as input to computer simulations where the solar cell processes can be studied in detail. The standard method to distinguish the different phases that form in the material is X-ray diffraction (XRD). Other important characterization techniques are Raman scattering, electron microscopy and electron spectroscopy. The solar cells are also characterized based on current and voltage properties, both in light and darkness, which is called an IV-measurement. A type of efficiency for different wavelengths is the quantum efficiency, QE, which also provides information about the solar cell’s properties.