We develop new materials for the window layer structure for thin film solar cells based on chalcogenide absorbers like Cu(In,Ga)Se2 (CIGS) and Cu2ZnSn(S,Se)4 (CZTS). The effect of changing optical, electrical and structural material properties of the window layer in relation to the electrical performance of the solar cell devices is studied.

The window layer itself usually consists of three thin, transparent layers with different electrical/optical properties, for example a front contact and a buffer layer. In CIGS solar cells today, the buffer layer is usually made of cadmium sulfide and the front contact of aluminum doped zinc oxide. Within the project, we primarily work with studying and developing:

The window layer is often made from several metal oxides since these both can be made transparent and fit into the solar cell’s band structure. The property that determines if the oxide is transparent and lets the light reach the absorber layer is that the difference between its energy levels for electrons, which is called its band gap, is much larger than the energy in the light with energies that is used to generate the electricity. Ideally, this means that the oxide cannot absorb that light. An example of these energy levels for CIGS solar cells are showed in the picture below. 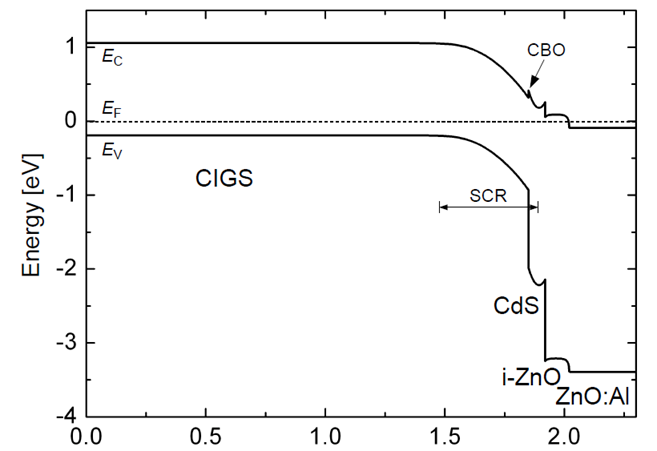 A front contact may however limit the power from the solar cell due to a trade-off between the conductivity and the transparency. This is because a higher part of free charge carriers in the oxide will increase its conductivity and thereby decrease the material use, but in the same time this will impair its transparency which will decrease the amount of light reaching the absorber layer. By exploring new materials and new methods to deposit front contacts, the research mainly aims to decrease the current losses.

For the investigated material systems, precise control of thin film and interface formation in the solar cell structure is aimed for. For this purpose, we mainly use vacuum based processing by chemical methods such as Atomic Layer Deposition (ALD) and Chemical Vapor Deposition (CVD) to synthesize the window layer structures. These are chemical processes and the method works by inserting the substrate in a chamber with chemicals in gas phase, called precursors. The precursors react with the surface of the substrate, one at a time or several simultaneously, until a film has been created on the surface.

Do you want to read more about the research on new window layers? Here you can find popularly written summaries of some of our articles.