Solar cells can be used in many different kinds of systems. Here are some examples.

If the location where solar cells are to be installed is very far from the national electrical grid it is convenient to have a stand-alone solar cell system. This means that the solar cells are connected to a charge controller which then sends the electricity directly to its applications, and one can also have a battery to level off the variations in the production. This kind of system has been used for a long time, for example in light houses as an alternative to kerosene lamps, but they are now also used for water cleaning, telecommunication, parking meters and household electricity in remote cabins. Solar cells produce DC and since the system is not connected to a grid, one can choose between DC and AC in the rest of the system. For AC, an inverter is needed between the solar cells and the load. 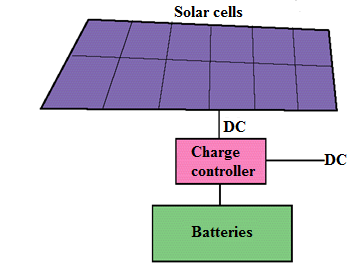 If there are several, small stand-alone systems these can be connected to get a more stable system. This is called a micro-grid.

Grid-connected systems are, as opposed to stand-alone, connected to an electrical grid. Since the solar cells are producing DC, an inverter is needed between the solar cells and the grid, which has AC. The solar cells can be installed for example on a building, either on top of an existing construction or integrated in the building itself when it is built. The electricity can then be used for the household or be fed to the grid if the production is larger than the household consumption. There are also solar panels on their own constructions, which can be connected together to big solar parks. These can produce high power and deliver electricity out to the grid.